“It is time for me to move on . . . I’m taking some time off to do things I enjoy outside of technology, such as collecting rare air-cooled Porsches, working on my cars and playing ultimate frisbee,” WhatsApp co-founder, CEO and Facebook board member Jan Koum wrote today. The announcement followed shortly after The Washington Post reported that Koum would leave due to disagreements with Facebook management about WhatsApp user data privacy and weakened encryption. Koum obscured that motive in his note that says, “I’ll still be cheering WhatsApp on – just from the outside.”

Facebook CEO Mark Zuckerberg quickly commented on Koum’s Facebook post about his departure, writing “Jan: I will miss working so closely with you. I’m grateful for everything you’ve done to help connect the world, and for everything you’ve taught me, including about encryption and its ability to take power from centralized systems and put it back in people’s hands. Those values will always be at the heart of WhatsApp.” That comment further tries to downplay the idea that Facebook pushed Koum away by trying to erode encryption.

It’s currently unclear who will replace Koum as WhatsApp’s CEO, and what will happen to his Facebook board seat.

Koum sold WhatsApp to Facebook in 2014 for a jaw-dropping $19 billion. But since then it’s more than tripled its user count to 1.5 billion, making the price to turn messaging into a one-horse race seem like a steal. But at the time, Koum and co-founder Brian Acton were assured that WhatsApp wouldn’t have to run ads or merge its data with Facebook’s. So were regulators in Europe, where WhatsApp is most popular.

A year and a half later, though, Facebook pressured WhatsApp to change its terms of service and give users’ phone numbers to its parent company. That let Facebook target those users with more precise advertising, such as by letting businesses upload lists of phone numbers to hit those people with promotions. Facebook was eventually fined $122 million by the European Union in 2017 — a paltry sum for a company earning more than $4 billion in profit per quarter.

But the perceived invasion of WhatsApp user privacy drove a wedge between Koum and the parent company. Acton left Facebook in November, and has publicly supported the #DeleteFacebook movement since. 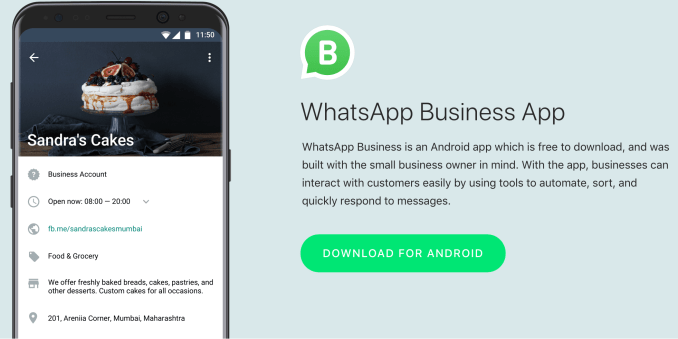 WashPo writes that Koum was also angered by Facebook executives pushing for a weakening of WhatsApp’s end-to-end encryption in order to facilitate its new WhatsApp For Business program. It’s possible that letting multiple team members from a business all interact with its WhatsApp account could be incompatible with strong encryption. Facebook plans to finally make money off WhatsApp by offering bonus services to big companies like airlines, e-commerce sites and banks that want to conduct commerce over the chat app.

Jan Koum, the CEO and co-founder of WhatsApp, speaks at the Digital Life Design conference on January 18, 2016, in Munich, south Germany. On the Innovation Conference high-profile guests discuss for three days on trends and developments relating to the digitization. (Photo: TOBIAS HASE/AFP/Getty Images)

Koum was heavily critical of advertising in apps, once telling Forbes that “Dealing with ads is depressing . . . You don’t make anyone’s life better by making advertisements work better.” He vowed to keep them out of WhatsApp. But over the past year, Facebook has rolled out display ads in the Messenger inbox. Without Koum around, Facebook might push to expand those obtrusive ads to WhatsApp as well.

The high-profile departure comes at a vulnerable time for Facebook, with its big F8 developer conference starting tomorrow despite Facebook simultaneously shutting down parts of its dev platform as penance for the Cambridge Analytica scandal. Meanwhile, Google is trying to fix its fragmented messaging strategy, ditching apps like Allo to focus on a mobile carrier-backed alternative to SMS it’s building into Android Messages.

While the News Feed made Facebook rich, it also made it the villain. Messaging has become its strongest suit thanks to the dual dominance of Messenger and WhatsApp. Considering many users surely don’t even realize WhatsApp is owned by Facebook, Koum’s departure over policy concerns isn’t likely to change that. But it’s one more point in what’s becoming a thick line connecting Facebook’s business ambitions to its cavalier approach to privacy.

It's been almost a decade since Brian and I started WhatsApp, and it's been an amazing journey with some of the best…