Facebook could use more evidence that it brings the world together rather than tearing it apart. Luckily, technology is finally catching up with the dream of letting people become friends across language barriers. Today at its F8 conference, Facebook announced it will begin rolling out chat translation within Messenger through its M Suggestions assistant.

Facebook’s head of Messenger, David Marcus, also announced that Messenger now has more than 200,000 active developers and 300,000 active bots, which facilitate 8 billion messages between people and businesses each month — up 4X since last year. Messenger is also getting hooked up with augmented reality for marketers.

Translation is starting super slowly with just English-Spanish conversions for users in the U.S. who start a conversation through Facebook Marketplace, its peer-to-peer commerce feature. But in the coming weeks, all U.S. Messenger users will get access, and over time Facebook says it will “launch this functionality in additional languages and countries.”

While users spend most of their time talking with offline friends who typically share a common language, Marketplace and Groups are too areas of Facebook where people are often exposed to strangers. Eradicating the language gap could let Group members get to know each other across cultures, and realize how much they have in common. Translation could also expand the potential customer base for Marketplace posts, helping people sell quicker and giving them more reasons to ditch Craigslist and other low-tech alternatives.

Amidst the recent Cambridge Analytica, fake news and election interference scandals, Facebook has started to take on a less savory public image. That could lead to less trust and less sharing. But in 2016, Facebook got serious about translation, switching from Microsoft Bing’s technology to its own stack. Advances in neural machine learning have made phrase-based translation more accurate, and M Suggestions started recommending Messenger features like payments or location sharing in Spanish to Spanish language users based on their chat text. Facebook already offers translation for News Feed comments and posts, but the expansion to Messenger could make for a great PR talking point.

Facebook made two other significant Messenger announcements today. They could encourage businesses to invest more in creating content and customer service on Messenger by making the experiences more efficient and better at driving sales. 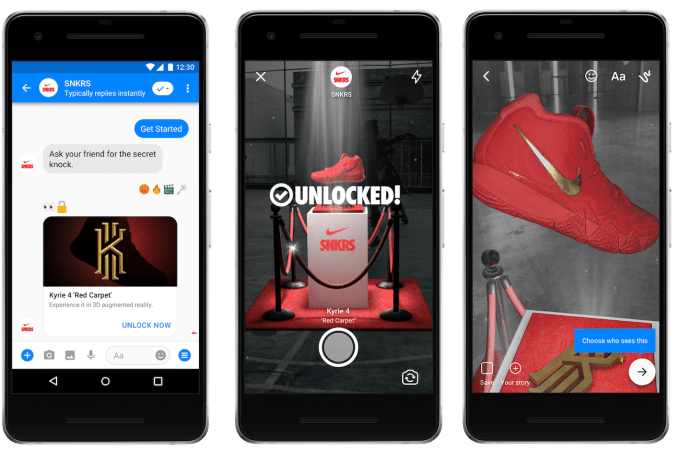 Businesses can now build augmented reality experiences directly into Messenger. Marcus tells me, “If you’re a brand and you want people to experience AR at scale, there’s really no way to do that.” Snapchat might offer branded AR, but there’s no way for a business to message you about it or pull you back into a conversation afterwards to turn your excitement into sales.

Now when people interact with certain businesses on Messenger, they can be prompted to open the app’s camera and use a pre-populated brand-specific AR effect. They can then return to the conversation, or shoot a photo or video of the experience and share it with friends. 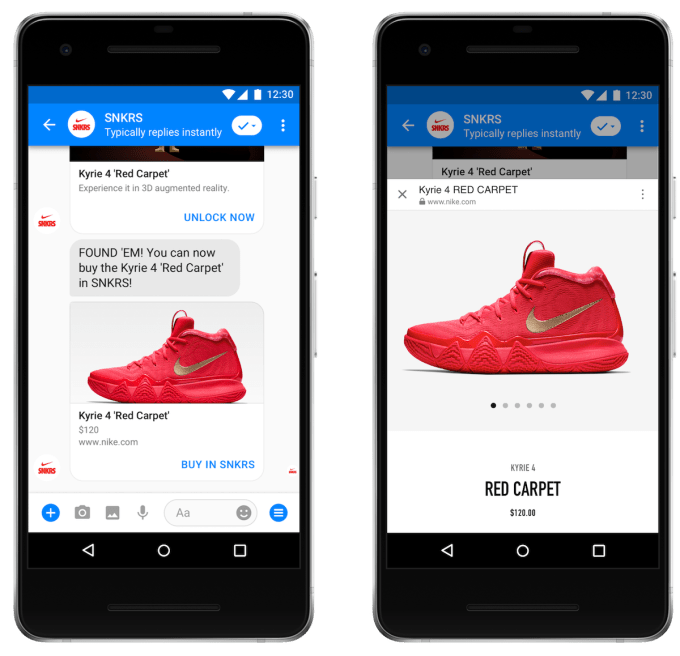 Once users have checked out the AR shoes, they can buy them from within Messenger

Branded AR in Messenger is launching in closed beta. Launch partners include a way to drop a virtual Kia car onto your driveway and try out customizations, an ASUS phone unboxing experience, a Sephora AR make-up try-on demo and a chance to check out Nike’s newest Kyrie Irving shoes. Users will then be able to make purchases, like buying the new Nikes, straight from within Messenger using their payment info on file with Facebook. That payments feature is still in closed beta too, but Marcus says it will open to more partners soon.

Wit.ai is shutting down Bot Engine as Facebook rolls NLP into its updated Messenger Platform

Finally, Facebook Messenger is letting businesses use its “built-in natural language processing” feature that launched last year within their Page inboxes. That way, when their followers message their Page, Facebook can automatically cobble together previously given answers to respond automatically. For example, if a Page is frequently asked questions like “what are your hours” and “when are you open,” they might create a “store hours” entity via the Page inbox training that can be sent when a question about store hours is recognized.

What we’re still waiting for, though, is the promised simplifications to Messenger’s interface. Its quest to embrace businesses, bots, Stories and visual sharing have made the app bloated. Marcus wrote in January that “The app became too cluttered” and they will be paring it back, but we’ve only seen more features stuffed inside for Messenger’s 1.3 billion users.