While Facebook execs had plenty of updates to share at Tuesday’s F8 keynote, there were far less announcements focused on the weird and experimental things that Facebook is trying to leverage AI and VR to do.

That was, until the company made its last announcement for something it’s calling “VR memories,” a weird feature which will take your old photos and leverage computer vision to take the flat 2D images and videos and turn them into spatial point clouds, giving users a bizarre, ethereal sense of the locations where photos were taken.

There was a lot that wasn’t answered in the keynote, and they maintained that this was definitely still in development as a demo, but it looks like they’re pitching this as a way to use VR to get deeper into old memories. “It’s like a Facebook album that has come to life,” Facebook exec Rachel Franklin told the audience during a brief demo. 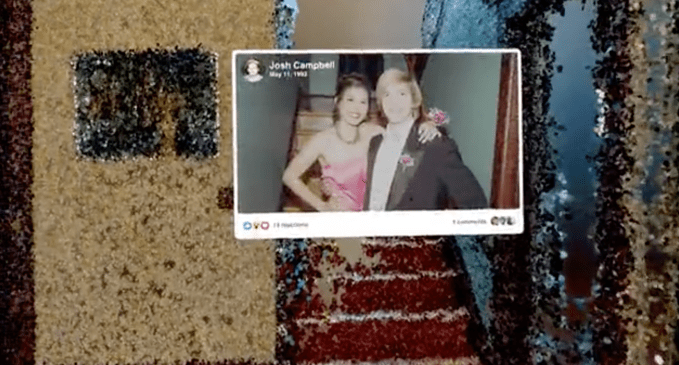 How impressive this tech really is will likely depend on seeing just how much data the feature needs to be fed in order to spit out these 3D point cloud models. If the company is promising that the feature could reconstruct your childhood home then that’s going to take a lot of photos and perspectives no matter how you slice it. Being able to infer depth from flat images is an area where computer vision tech has made leaps and bounds in recent years, while there are many major contributions to be made with things like photo editing thanks to this, using it as a tool to craft “VR memories” is certainly… creative?

I can’t imagine a ton coming of this, but it’s certainly interesting and definitely an odd thing for Facebook to end its F8 keynote with.