On the heels of Facebook announcing its intent to add a dating element to its platform, dating company Match’s stock is suffering. Match is the brand behind dating services like Tinder, Match, OK Cupid and Plenty of Fish.

At the time of publication, Match’s stock was trading down about 22 percent. 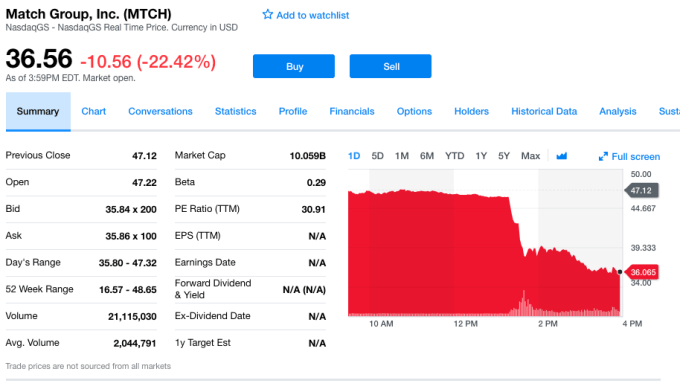 Facebook’s entrance in this space brings it into direct competition with Match’s bread and butter.

According to Facebook CEO Mark Zuckerberg, the dating functionality will be a standalone feature that will focus on legitimate long-term relationships, rather than just hookups.

Bumble is another competitor that may be affected by Facebook’s new service, but the company says it’s “thrilled” about today’s news.

“Our executive team has already reached out to Facebook to explore ways to collaborate,” a Bumble spokesperson said in a statement to TechCrunch. “Perhaps Bumble and Facebook can join forces to make the connecting space even more safe and empowering.”