Workplace, the more secure, closed enterprise version of Facebook that competes against the likes of Slack, Microsoft Teams and Hipchat as a platform for employees to communicate and work on things together, says that it today has tens of thousands of organisations using its platform.

Now to pick up more, and to bring more of customers into the paid premium tier of Workplace, Facebook is announcing a couple of new developments at F8.

First, it’s expanding the premium tier of the service with several more integrations — apps that it says have been the most requested by the “tens of thousands” of organizations using Workplace — including Jira, Sharepoint, and SurveyMonkey, bringing the total now to just over 50. And second, Facebook is now taking applications for app developers who want to integrate with the platform.

The latter is a significant shift: up to now, Facebook had been handpicking third-party integrations itself.

New integrations for JIRA, Cornerstone OnDemand and Medallia allow users to bring in previews of content from these apps so that they can discuss them in Workplace. Users of Sharepoint from Microsoft can now also share folders from that into Workplace groups. 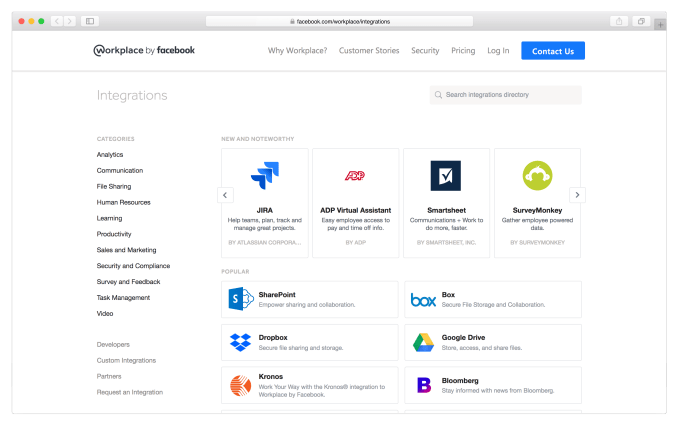 Meanwhile, users of SurveyMonkey, Hubspot, Marketo, Vonage and Zoom can get notifications from those apps to update on how campaigns and other work is running within those services.

Lastly, Workplace is now bringing bots into its platform to help manage queries from apps outside of it. A new integration with ADP for example will let employees start a chat with it to request a payslip, book and get updates on vacation time and more. Others that are launching bots for querying their apps include AdobeSign, Kronos, Smartsheet and Workday. 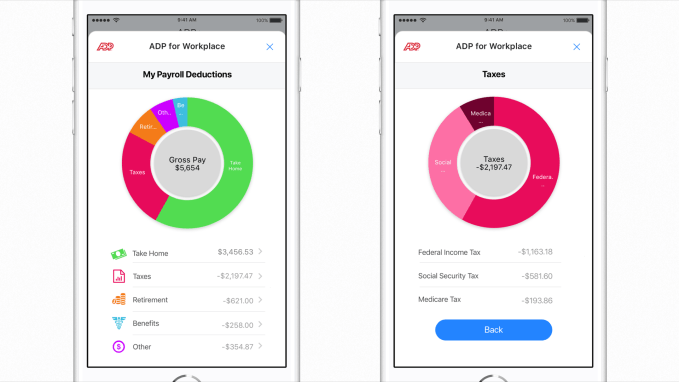 The bigger idea behind today’s app expansion, and opening up the platform to more users, is to continue to expand the usefulness of Workplace.

When the service made its official debut in closed beta back in January 2015 (when it was called Facebook at Work), it was little more than a basic version of Facebook that could be used in a more closed environment, a little like a closed Facebook Group.

It rebranded to Workplace when it officially left its closed beta in October 2016, but that was nearly two years later.

The subsequent addition of apps and features like chat (which came a year after that) have also been very gradual. Even today, there is a big gulf between the 50 or so apps that you can use with Workplace and the 1,400+ that are available on a platform like Slack.

Julien Codorniou, who leads the Workplace effort at Facebook, describes the company’s slower approach to adding apps and features as very intentional.

“We don’t need 1,000 apps on Workplace,” he said. “Our customers ask for an application like Sharepoint or Jira. We wanted to keep the integrations meaningful, and to keep them beautiful in the news feed.”

In 2017 Workplace snapped up retail giant Walmart as a customer, and in a way that deal is indicative of how Workplace has positioned itself as a product.

Facebook is targeting businesses that have a mix of employees that range from those who sit at desks to those who never sit at a desk. And as a result, it wants to keep the number of apps and IT noise low to avoid putting off those users.

“We try to connect people who have never had access to software as a service by making products like ServiceNow easy to use,” Codorniou said.

So there is a common touch, but it only goes so far.

Ultimately, the full set of app integrations is only available for those users who are on the premium tier of the product. Pricing is $3 per active user, per month up to 5,000 users. More users are negotiated with Facebook. Those who are standard users get a much more limited range of apps, including Box, OneDrive and Dropbox and RSS. Codorniou would not comment on whether Facebook had plans to add more apps into the free tier.