There will be no “Vine 2” — at least for now. Trying to take on the giant social networks without external funding proved too tall a task for six-second video app Vine’s co-founder Dom Hofmann. “I’ve made the very difficult decision of postponing the V2 project for an indefinite amount of time. There are several reasons for this, including a bit of ‘sequelitis’, but I’d like to explain the biggest one, which is due to financial and legal hurdles,” Hofmann wrote on the community forums he set up for V2.

Announced in late December out of his frustration regarding how Twitter neglected and eventually shut down Vine, Hofmann had since built a creative tool startup called Byte, and is still leading a virtual reality company called Interspace, but was trying to run V2 as a self-funded personal project on the side. The plan was to launch in 2018 with an app that let you record or upload 2 to 6-second looping videos and much stronger anti-harassment safety features.

But without millions in outside investment, it was an insurmountable task to develop the app, host the videos and grow the audience. While Hofmann didn’t specify, it seems Twitter wasn’t happy about him using the name V2 and an almost identical logo. “The interest has been extremely encouraging, but it has also created some roadblocks . . . The attention has also raised an issue that we might not have faced otherwise: legal fees have been overwhelming,” Hofmann wrote. We’ve asked him and Twitter if Twitter was suing or threatening legal action against Hofmann or V2.

While there’s still no ubiquitous way to share super-short videos, Instagram, Facebook, Twitter, Snapchat and YouTube are no paltry competitors. So now, Hofmann says, “We take a step back. The code and ideas still exist, but until everything else comes together, we can’t move forward. Again, this is indefinite, which means that it could take a long time. But it’s necessary.” 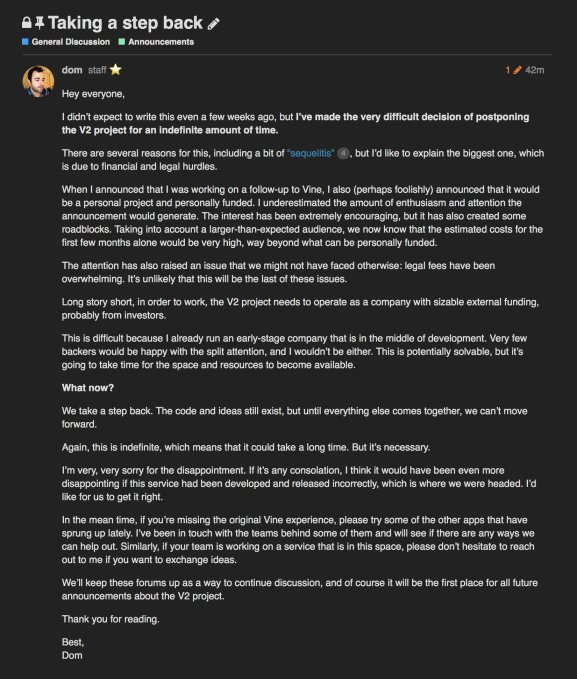